a report from Brian Holmes C.Ss.R 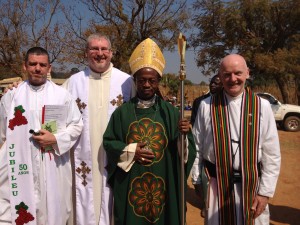 On Friday, August 17th, we had a big celebration: the inauguration of the Redemptorist Mission here in Furancungo. The people spent days and days preparing, cutting grass to cover the huge area where the  Mass was to be celebrate under  a large trellis, preparing “thobwa” (a traditional sweet drink made from corn) rehearsing the songs and dances, preparing the ingredients for lunch, and so on. Over a thousand people arrived from the rural communities.  A team came from the Lifidzi region, linked to the Jesuit mission. Two Provincials, Fr. Michael Kelleher of Dublin and Fr. Eridian of Fortaleza, also were present. Two Argentinian Redemptorists travelled from southern Mozambique, Frs. Marcelo and George. We were moved by the presence of Father David, a Jesuit of 84 years, who in 1978, when he finished celebrating Mass here in Furancungo, was arrested and taken to Tete, and expelled from the country. He symbolized the suffering of so many years the people come through the two wars, the war of independence and the civil war.

The Mass presided by Bishop, Dom Ignatius began at 9.30 and ended at 13.30! There were songs, many songs, dances, readings, reflections, drama, sharing, testimonies, a huge offertory that included nine goats, chickens, corn, potatoes, peanuts, beans, all in an atmosphere of joy, gratitude and hope.

After Mass 1200 liters of thobwa was served to all the people, and represent

atives of the different sectors of the parish, as well as some traditional and civil authorities, were served a lunch inside the chapel.

They made up a song to celebrate this special day and their joy at receiving Redemptorists Missionaries after so many years of waiting. 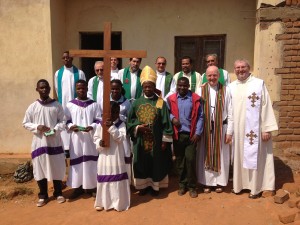